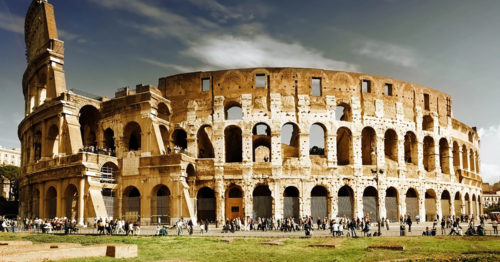 Ancient Rome grew from a small town on central Italy’s Tibet river into a huge kingdom that at its peak encompassed most of Europe. As legend has it, Rome was founded by Romulus and Remus, twin sons of Mars, the god of war.

The Roman empire was one of the most interesting things to study in history. How much do you know about it?

Who was the father of Romulus and Remus?
Mars
Jupiter
King Numitor
A wolf

Which was the first Roman road – and where did it run?
Via Valeria
Via Egnatia
Via Flaminia
Via Appia

Which of the following did not defeat Mithridates VI of Pontus?
Sulla
Lucullus
Marius
Pompey

Which enemy city did the Romans plough with salt?
Carthage
Syracuse
Corinth
None

How many times was Rome sacked in antiquity?
Six
Three or four
Twice
Once

How many heirs did Augustus lose before his death on 19 August AD 14?
Six
Three
Five
Four

Which of the following did NOT die in battle in Mesopotamia?
Crassus
Julian
Gordian III
Valerian

What did Constantine see in the sky?
All or none
Apollo
A cross
The words ‘in this sign conquer’
A solar halo 8%

Which of the following emperors did not win a victory against the Goths?
Theodosius I
Valens
Justinian
Julian

How much do you know about Ancient Rome?

NEXT: Take our most popular quiz, Can You Complete These 24 Common English Sayings? (we bet you can!)